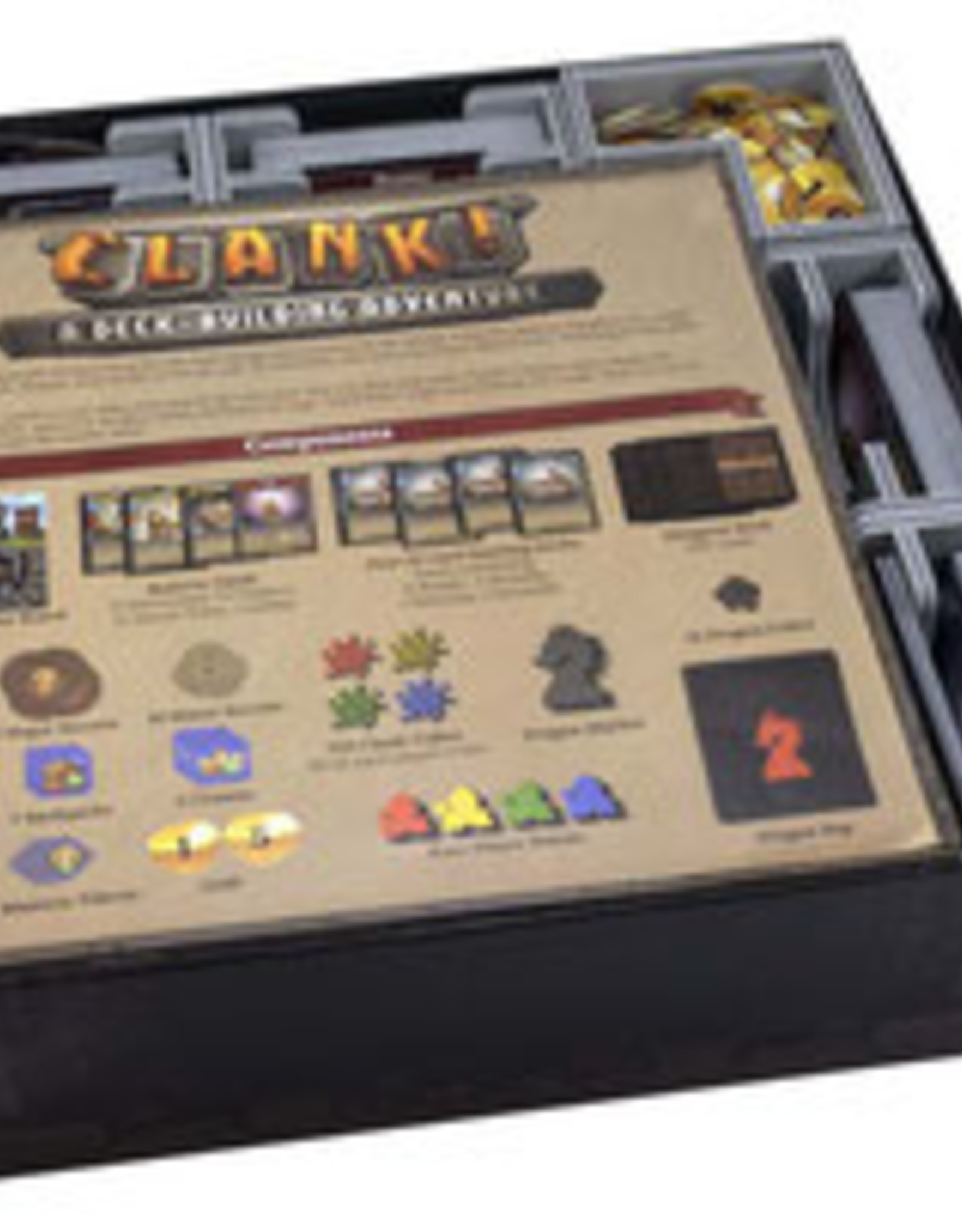 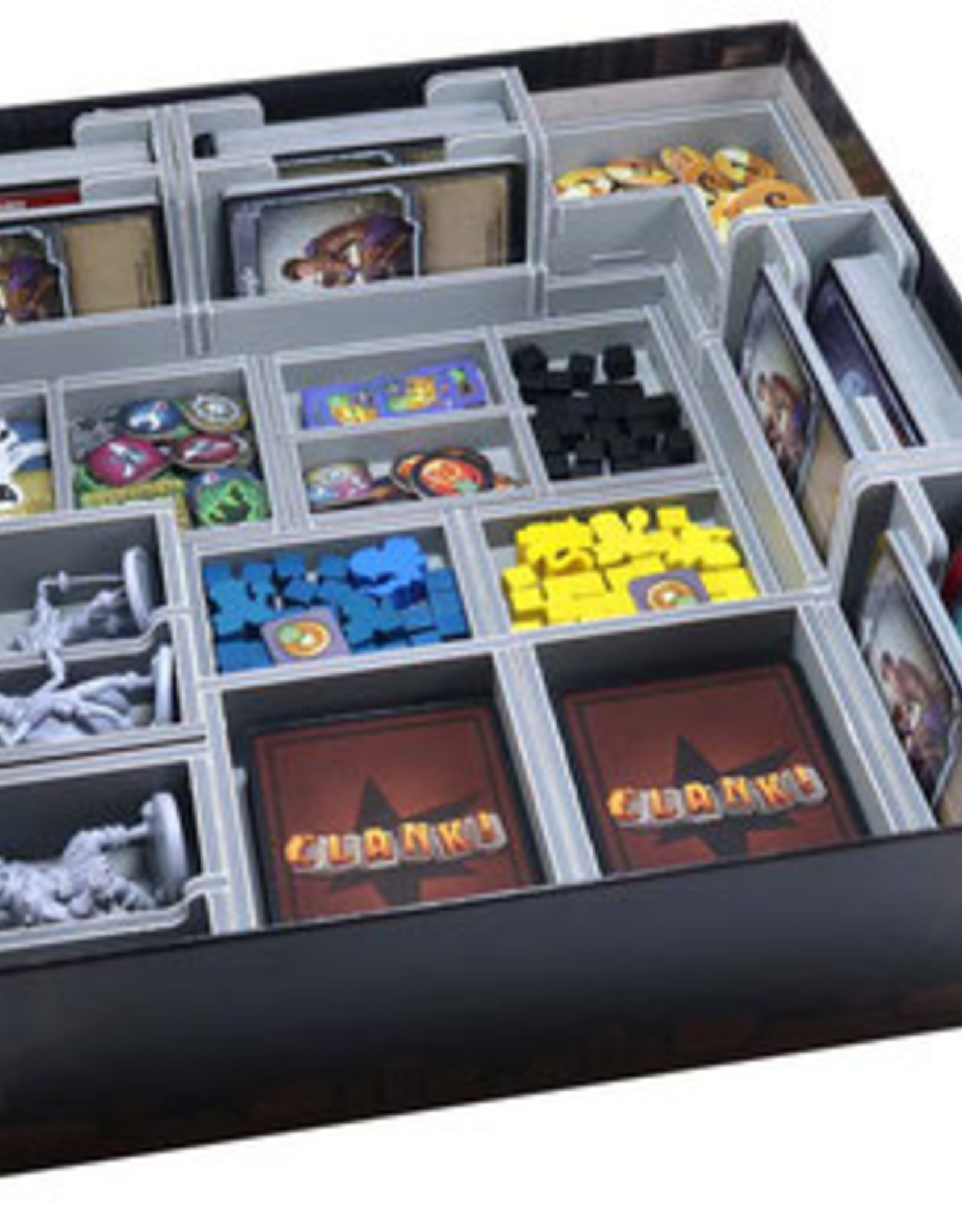 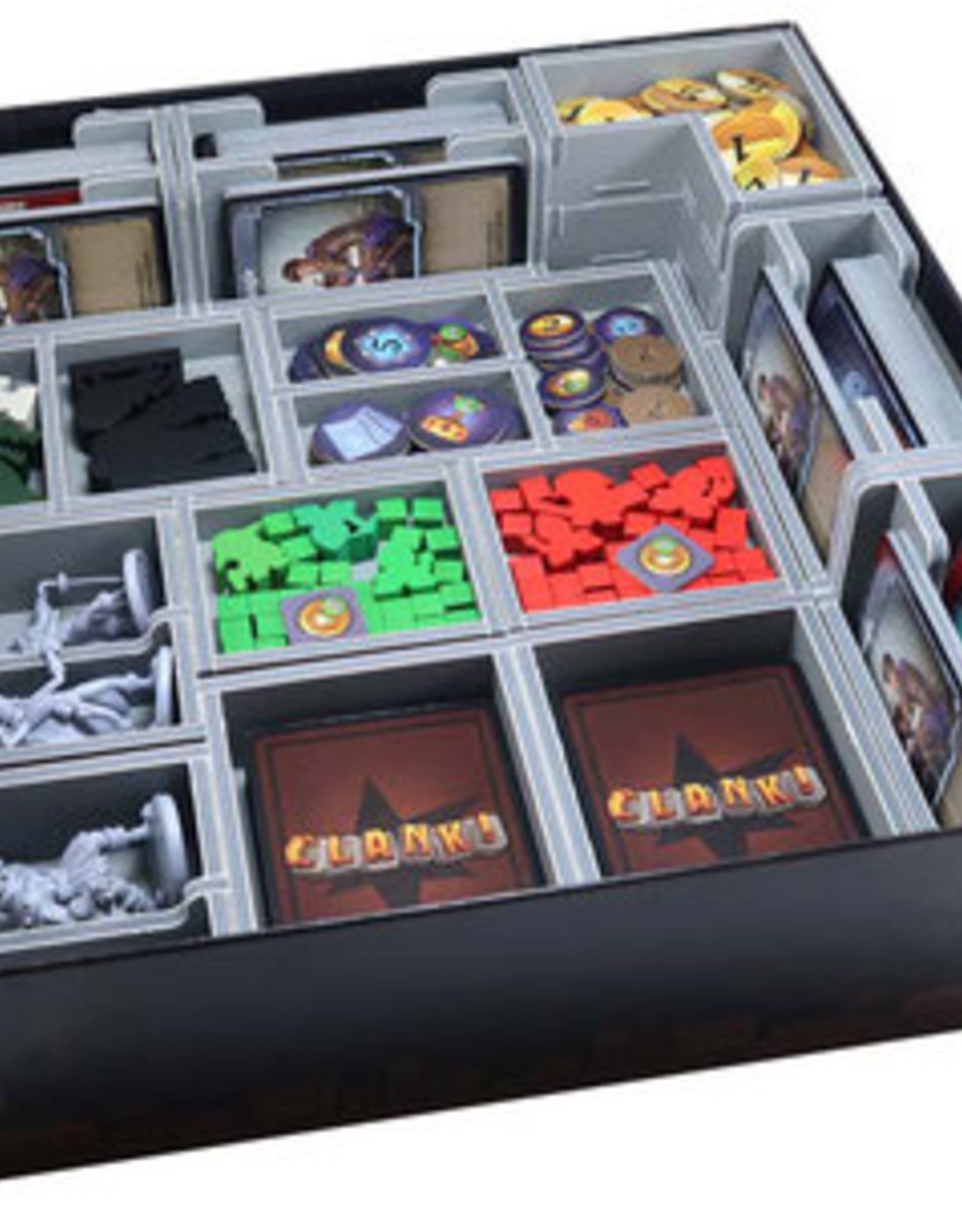 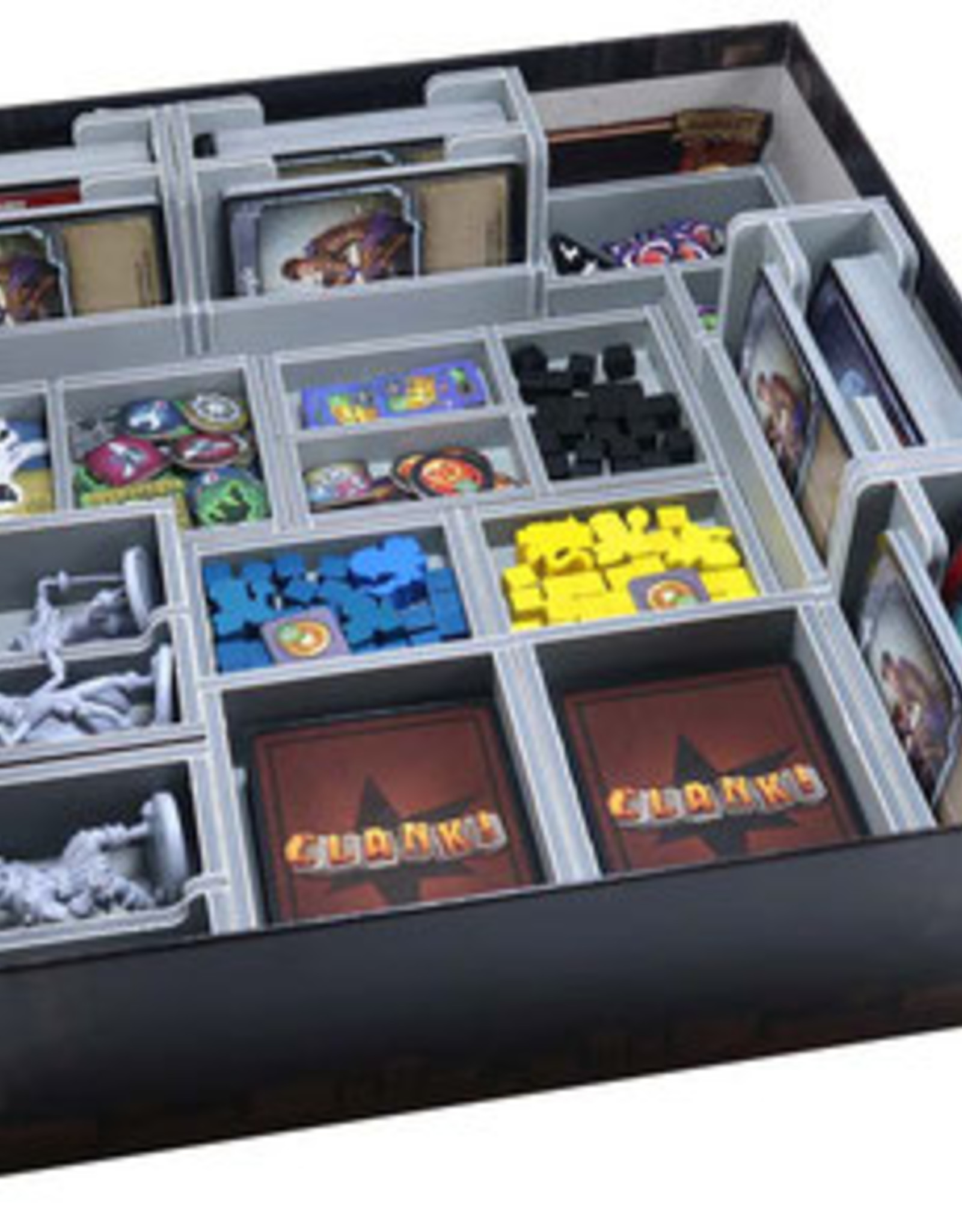 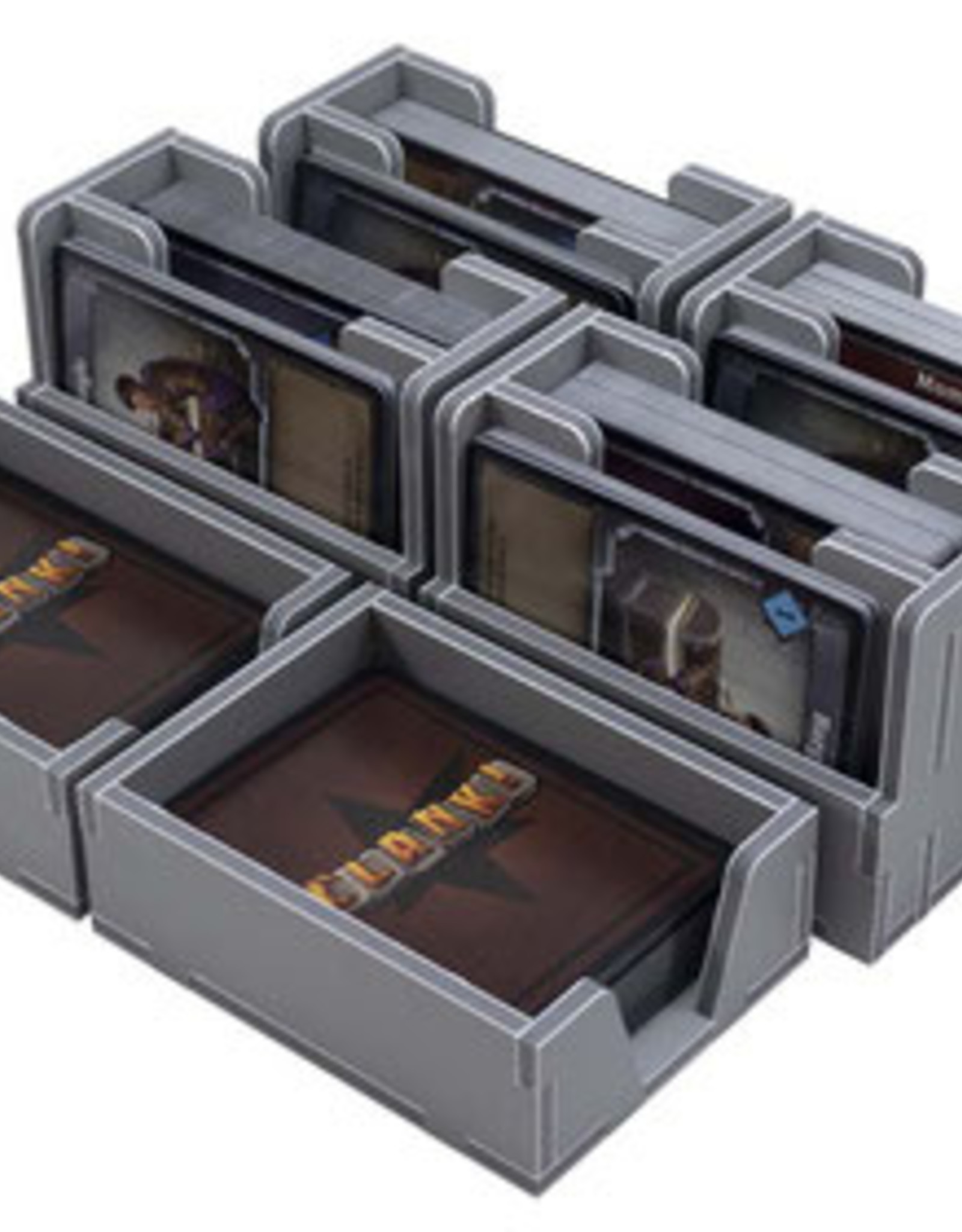 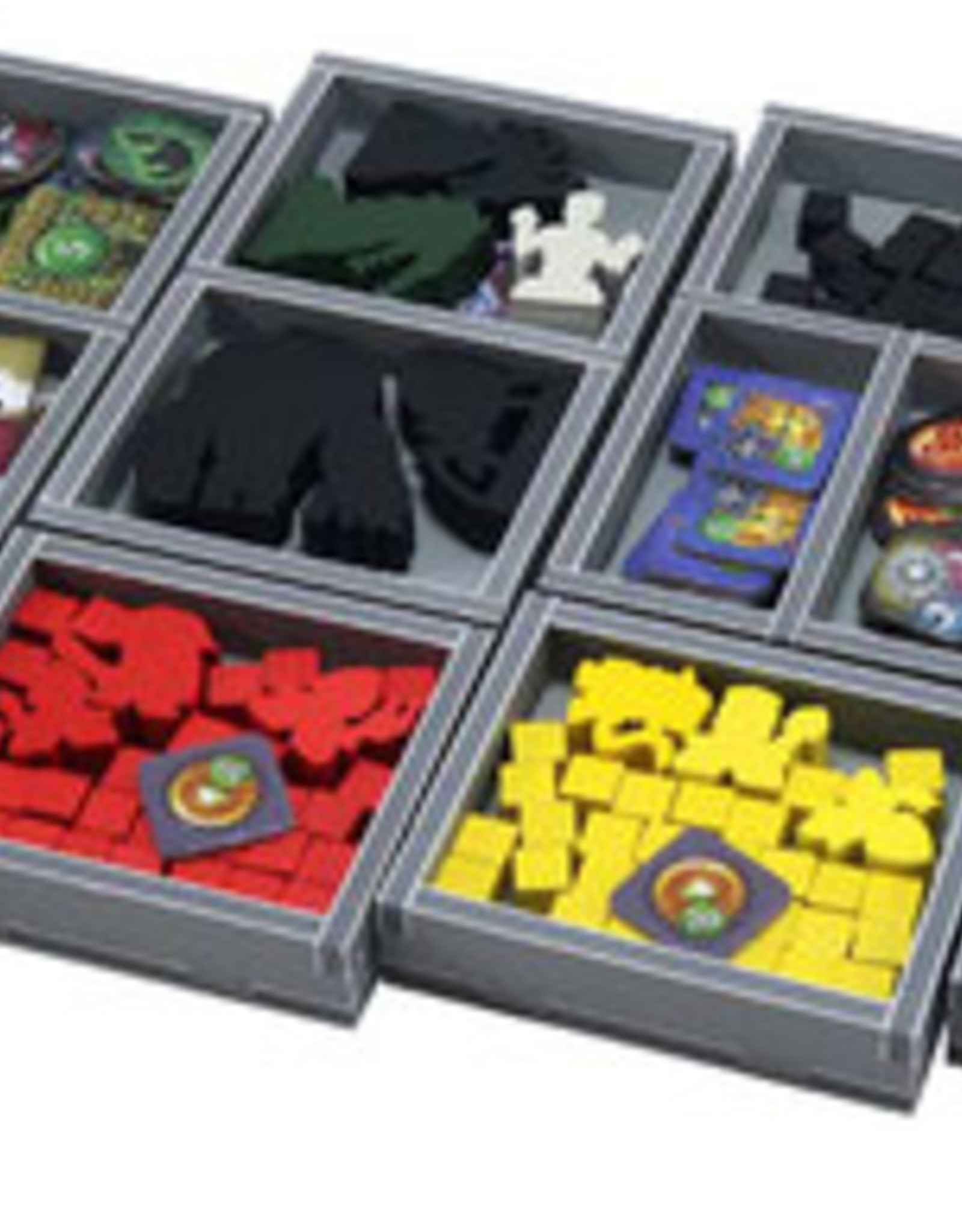 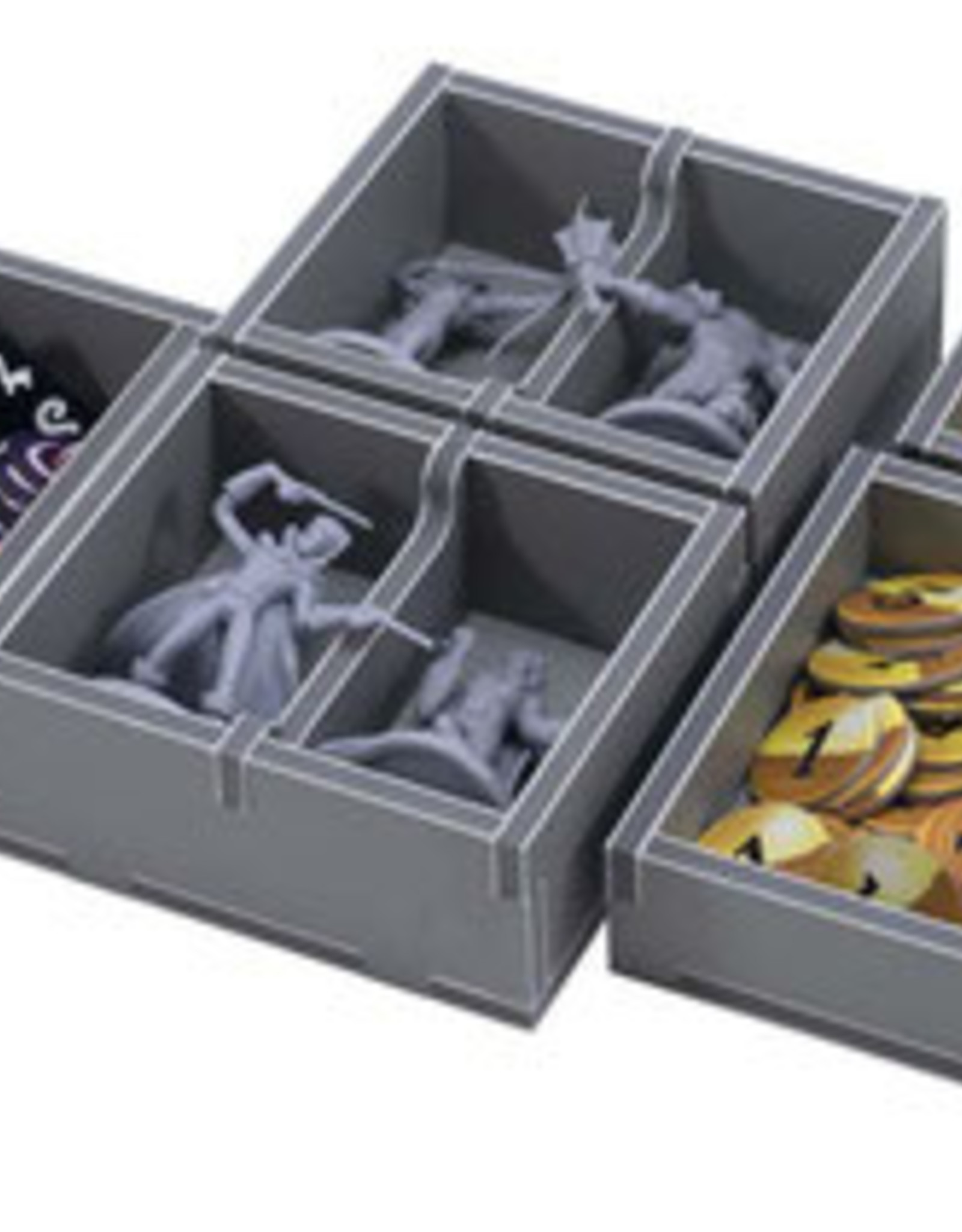 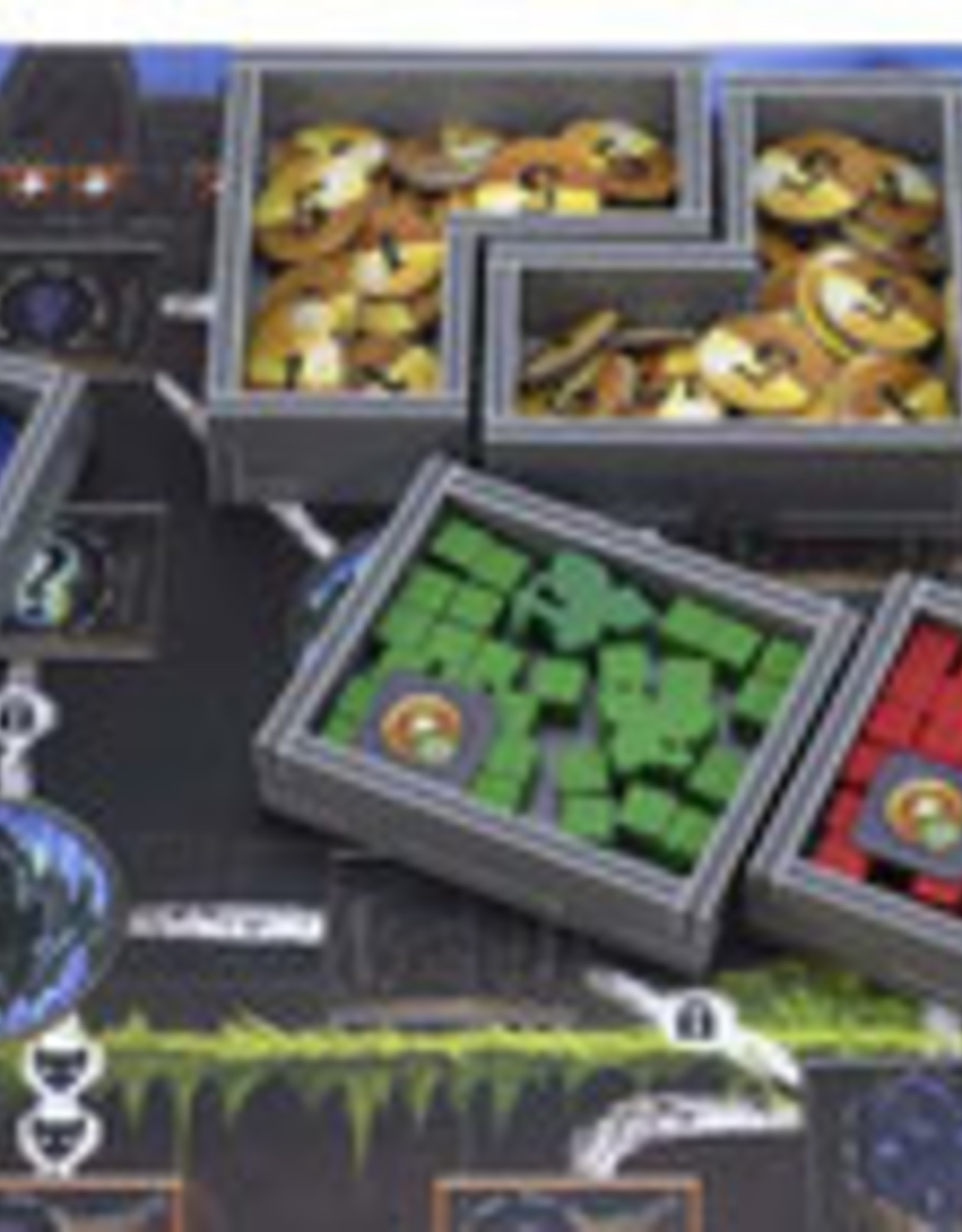 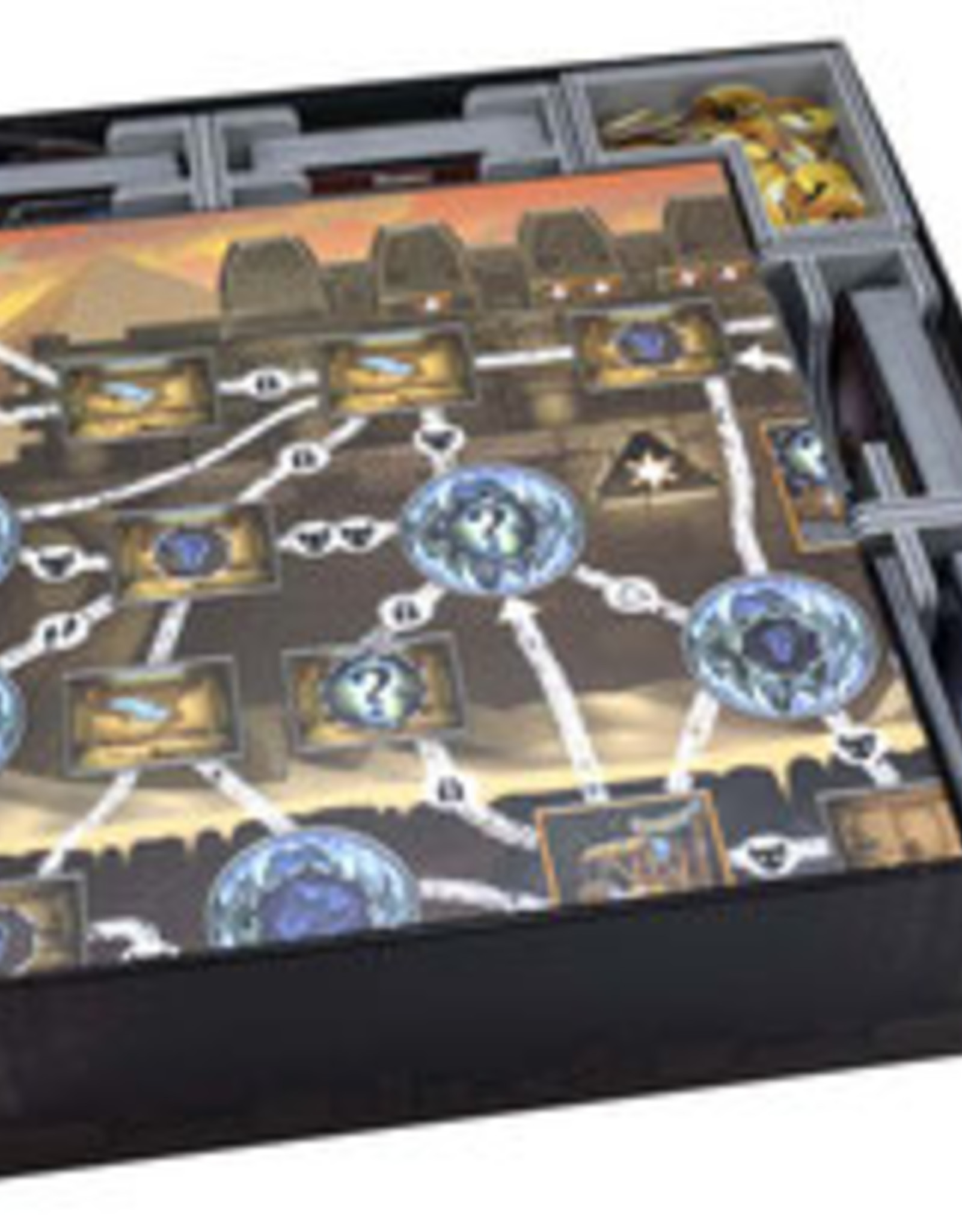 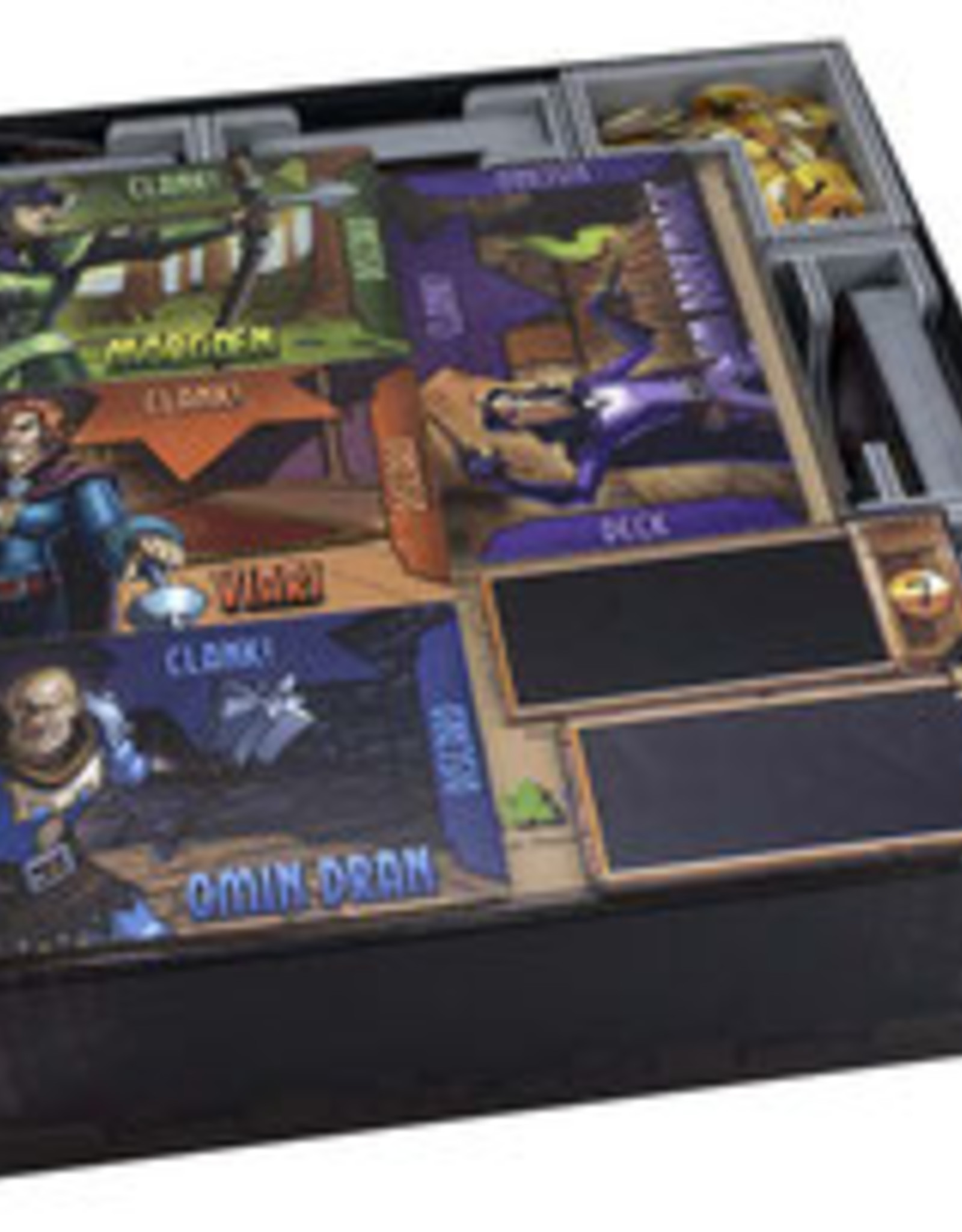 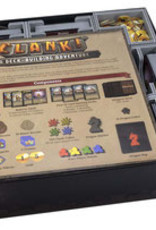 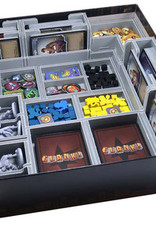 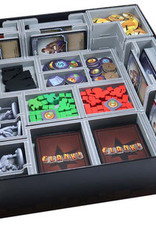 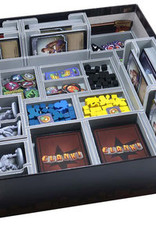 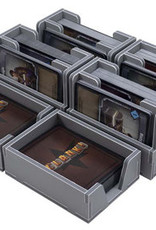 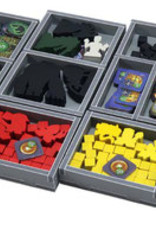 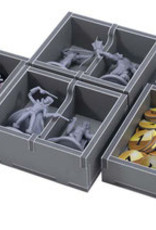 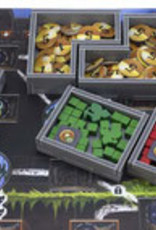 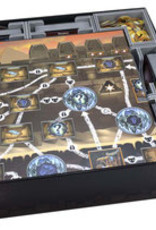 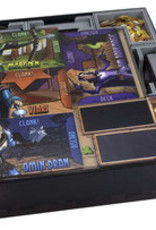 Insert compatible with Clank!®, and the Sunken Treasures®, The Mummy’s Curse®, Gold and Silk® and Acquisitions Incorporated: Upper Management Pack® expansions. The design provides both efficient storage and improved game play. Many of the trays can be utilised during the game, and they greatly aid set-up and clear-away times. The boards act as a lid on top of the trays.

The insert is arranged in layers and also has space for the soon to be released Temple of the Ape Lords® expansion components, but not for the expansion's board. Note also the cloth bag rolled up on the left.

There are six trays for storing the large cards. Two of these are for horizontal storage of the dungeon deck. The other four are for vertical storage of the expansion dungeon decks, the reserve cards and the Acquisitions Incorporated® starter decks. Each of these four trays also have a slot in the front for the base game starter decks. All cards can be sleeved with quality sleeves.

As mentioned above all the trays can be used during the game to organise the components and make access by all players easy.

Once the insert is packed into the box you need to next place the four game boards on top (note there is not space in the insert for the fifth board from Temple of the Ape Lords®). This is followed by the rule books as shown. Lastly you need to place the Acquisitions Incorporated player boards and two of the markets on top of everything else. This will fill the box to the top and the game can be stored vertically.

Note that the cat standee and third market board go down the side of the box, held in place by the insert trays as shown here. 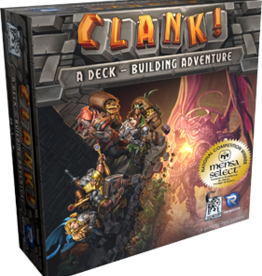 Burgle your way to adventure in Clank!, the new deck-building board game.
Add to cart
RENEGADE GAMES STUDIOS Clank!
$65.00
By using our website, you agree to the use of cookies. These cookies help us understand how customers arrive at and use our site and help us make improvements. Hide this message More on cookies »